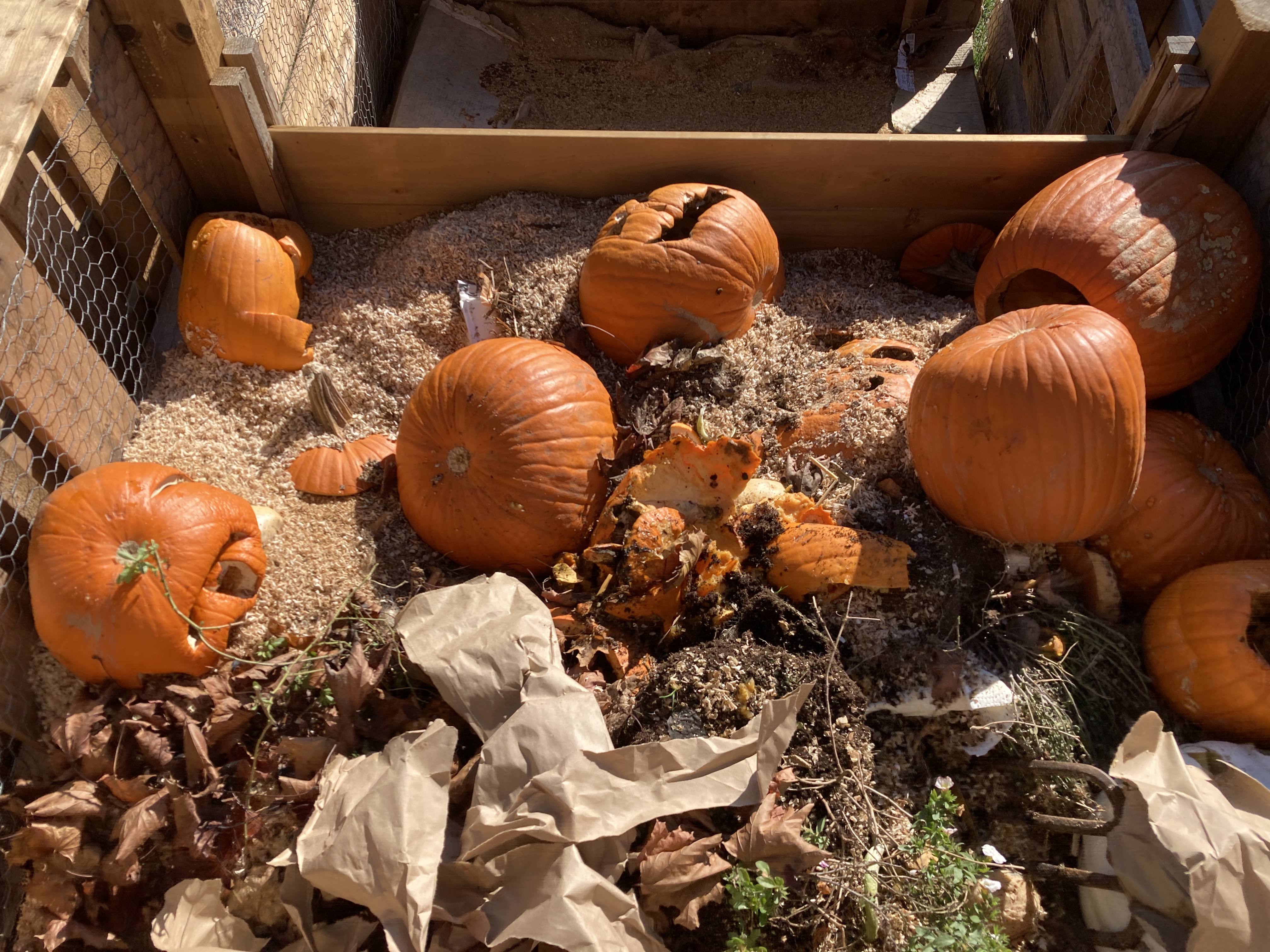 A Sea of Orange! Orange is my favourite colour! If you want to see something amazing, head to the City of Guelph-Guelph-Wellington ORGANIX processing plant on Watson. They pick up thousands and thousands of post-Hallowe’en dejected pumpkins… it looks like a psychedelic humpy-bumpy pumpkin carpet.

Good for you if you put your mouldy, used pumpkin into the Green Bin!

But, as we are learning, there are many, many (too many!) folks in Guelph who, for any number of reasons, do not have access to a Green Bin. This means that they can’t direct their “organic waste” such as sad-assed pumpkins, into the municipal waste stream.

-Carried a long way then smashed against white pine trees, deep in the forest. That one gets an “A” for effort. And, the squirrels and birds and skunks and skinks will likely appreciate the Cheezie-coloured munchies

-Thrown into the Eramosa or the Speed River.

-Left on the side of the road, sometimes just one street over from where you live. (What exactly does that accomplish!? So sleazy!)

-Left on the curb out front of your house for somebody or something else to deal with it. 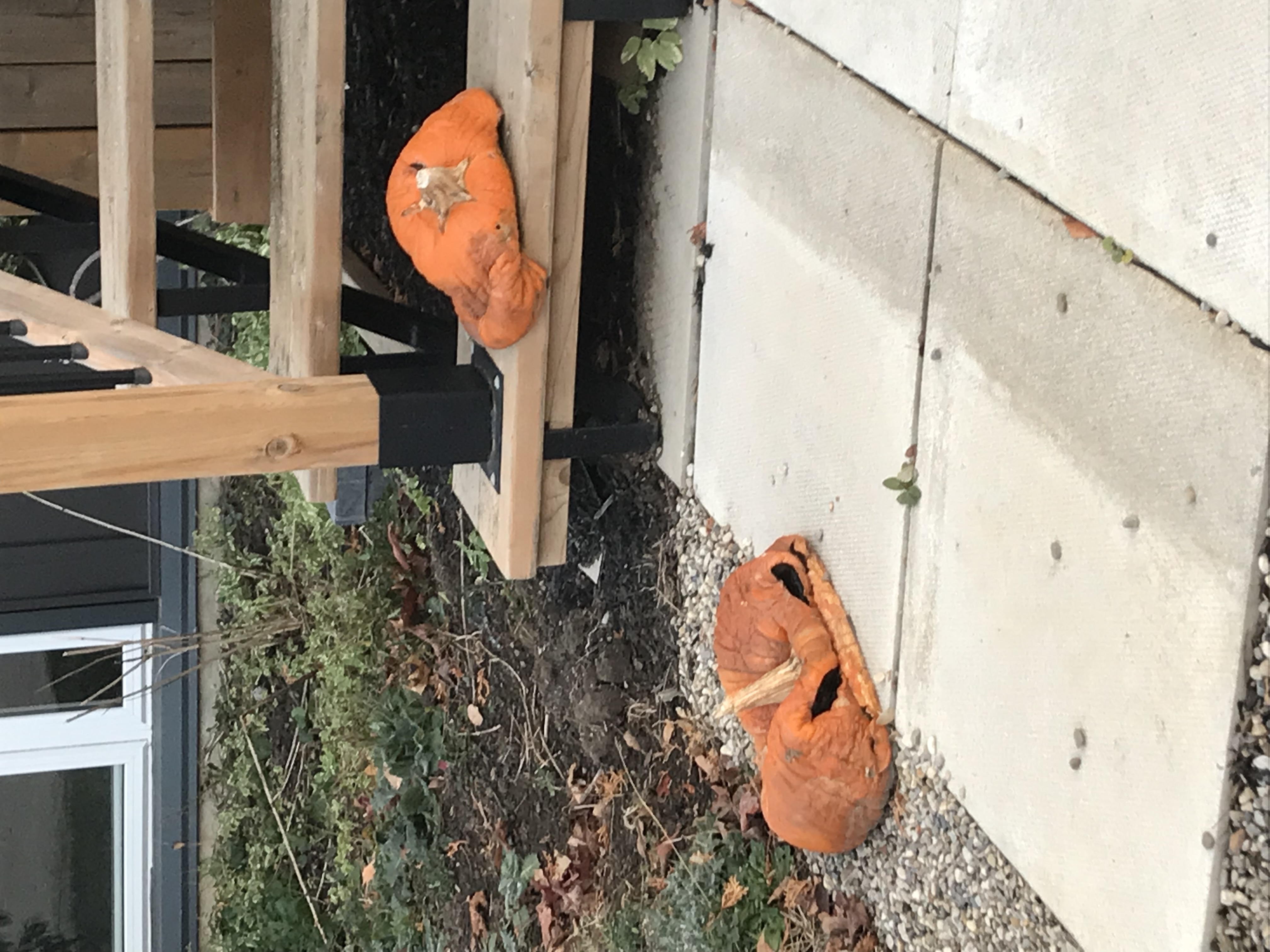 On our street, which used to have a magical night-lit “Pumpkin Parade” in the Tytler School Yard when the schoolyard was not being used as a parking lot (!)… people just left their pumpkins on the grass boulevard out front. Now there are about 15 of them, gross and stinking. They are starting to give off clouds of black Plague spores. Eeek.

I moved one that still had some integrity to it, down about 20 feet to where I also put a garbage can for people to put their poo bags in rather than also throw anywhere they fucking want to on our lovely street… to see if the people who put their apple cores in the garbage with the dog poo bags (but not their cigarette butts! I think I need an algorithm) will think of the pumpkin head as a creative composting unit and start to put their apple cores in there. It’s so easy. You don’t even have to put a “bin liner” and you don’t have to step on a lever to get the pumpkin lid to lift!

Anyhow, here are three other solutions which are ecologically and socially excellent: we invite any and all of you with pumpkin issues or pumpkin guilt, to adopt them!

*Cut them in half. Scoop out the seeds. Roast them & eat them. Yum! Roast the pumpkin until it’s collapsing a bit and a fork goes into it very easily. Then, scoop out the soft filling and use it in soups, muffins, curries, cereal. I was amazed to see just how different the flesh is, of two pumpkins that appeared, on the outside, to be identical. One was orange and smooth. One was almost white, and stringy. Both were perfectly edible:

#2: COMPOST! Bring your pumpkin to one of our COMMUNITY COMPOST SYSTEMS! There is one at 490 York Road (on the slope up from “Pura Vida” Woodworking). There is one at the Two Rivers’ Huron Street Garden (along Manitoba Street). Go ahead and enjoy tossing that fucker right in there and watching it collapse into goo.

(Please remove the candles and candle holders as they don’t break down into soil. There’s a garbage bag there you can put those into). They will be able to hang out with lots and lots of their old pumpkin patch buddies, and our Super Accelerator Compost Systems will turn them into gorgeous soil in no time! Or, Bring your pumpkin to any of the compost systems found in any of the over-forty Community Gardens around the City. They will definitely turn into dirt there, eventually.

Don’t have worms? Silly billy! Get some! They are groovy and non-stinky and they eat their way through almost anything that you can’t put into a backyard compost system (and not into the bigger Community Composters either) would otherwise put into the Green Bin. Yup, even things like cheese and bread and chicken bones and donuts. We put the skins from our roasted pumpkins into our worm bins (which live under our dining room table by the way), and they went totally BANANAS for the PUMPKIN. Um, wait. No. The worms went totally PUMPKIN for the BANANAS. Nope. Not quite right either. The worms really showed some enthusiasm toward pumpkin offerings.

We sell small worm kits for 20$. Why not get one and try it out for the winter? It’s a great way to turn “waste” into something that your houseplants will thank you for, when you give them some worm poo. Contact us if you want one! 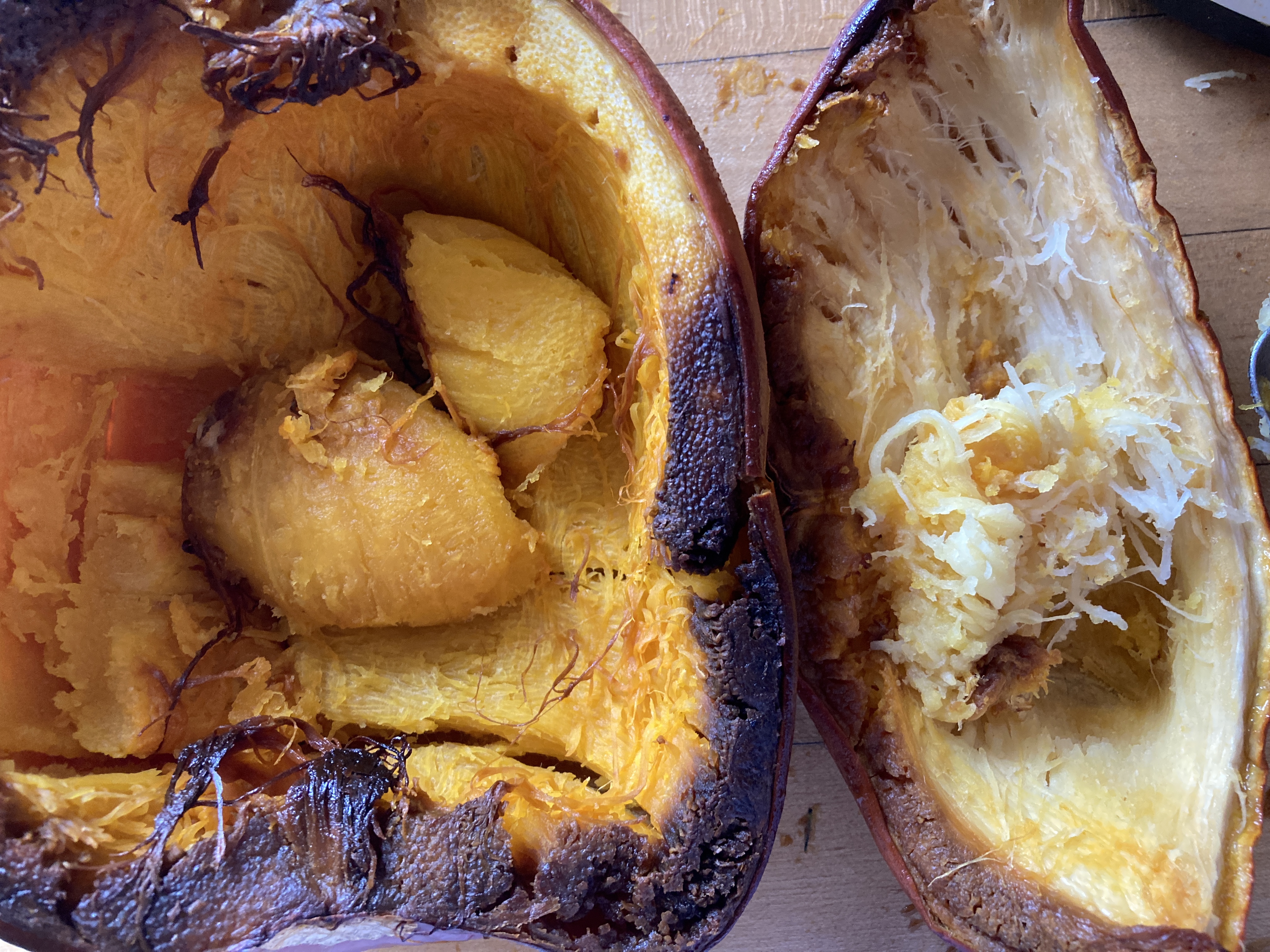 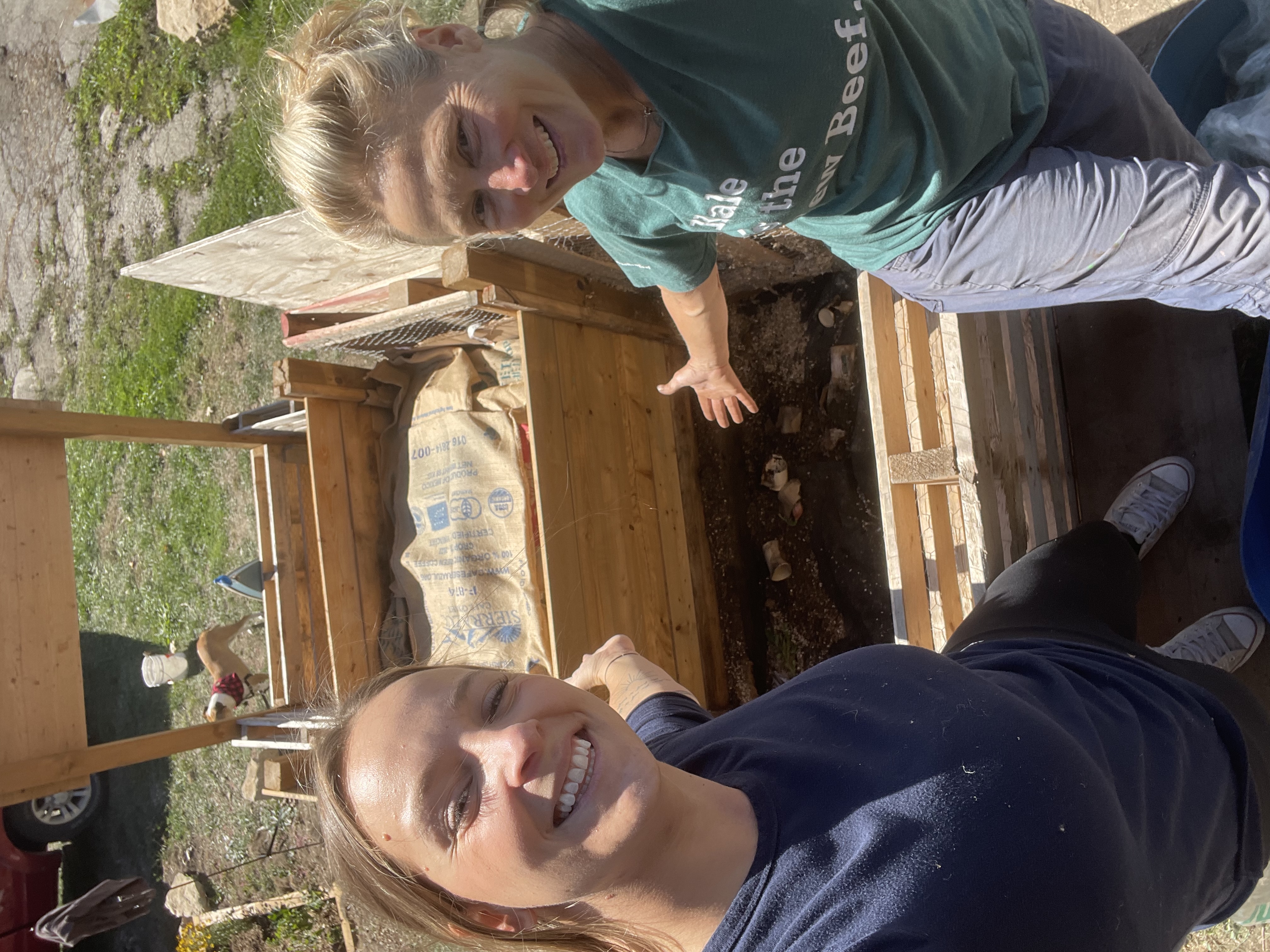 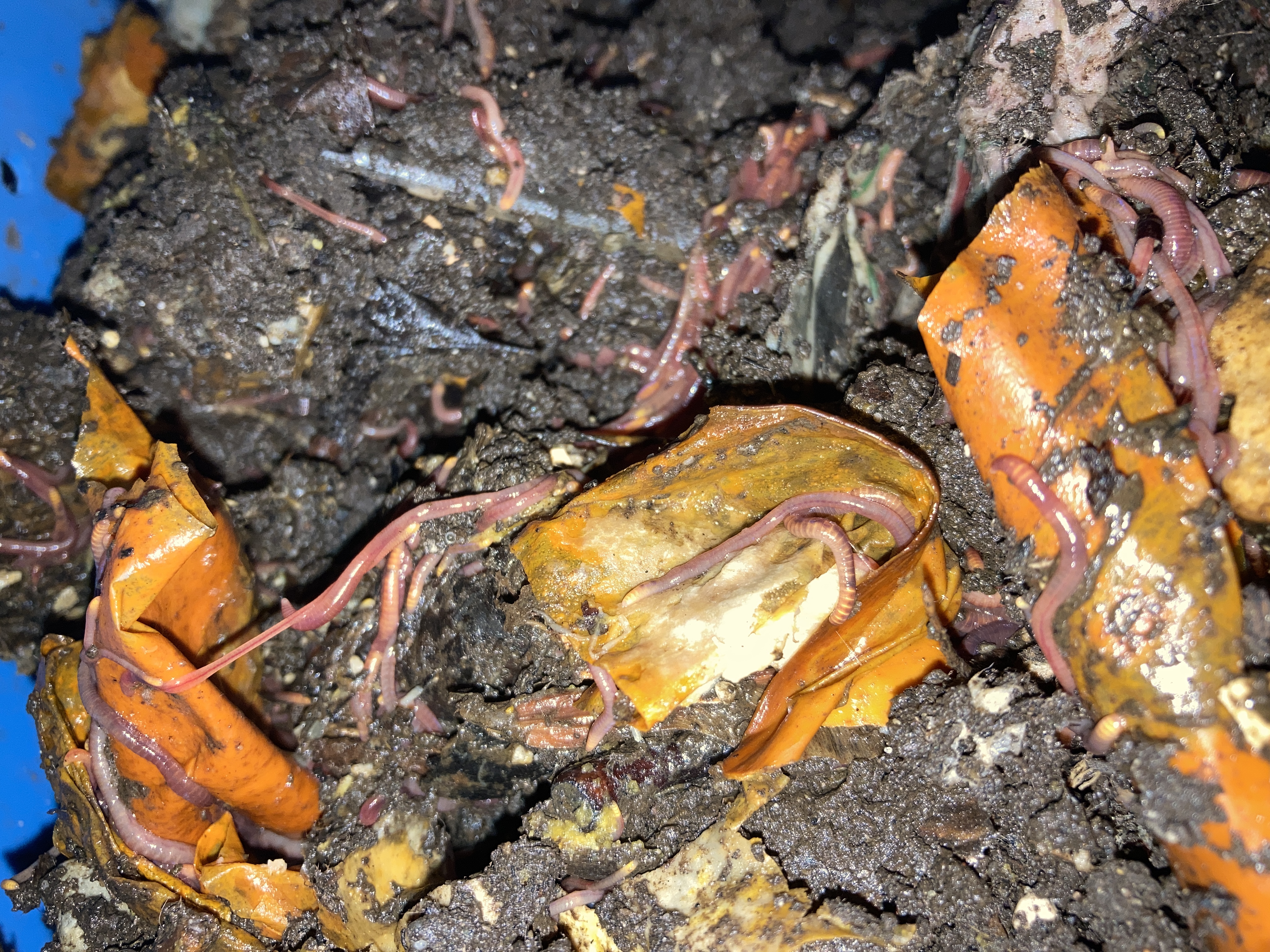 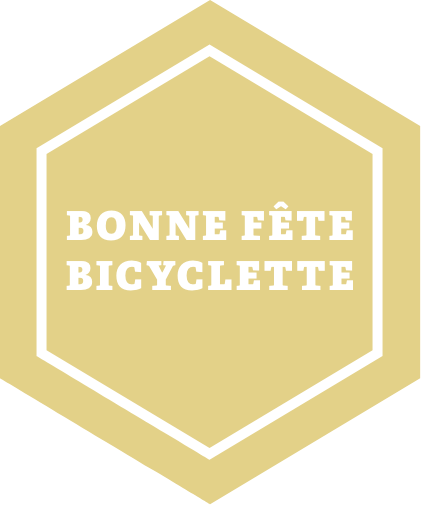 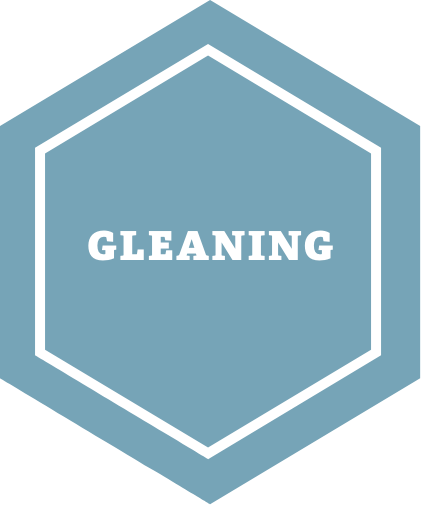 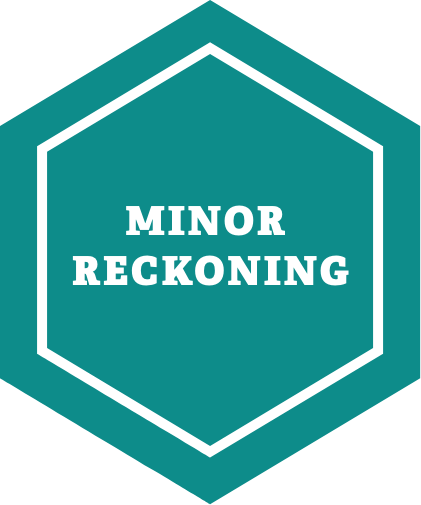 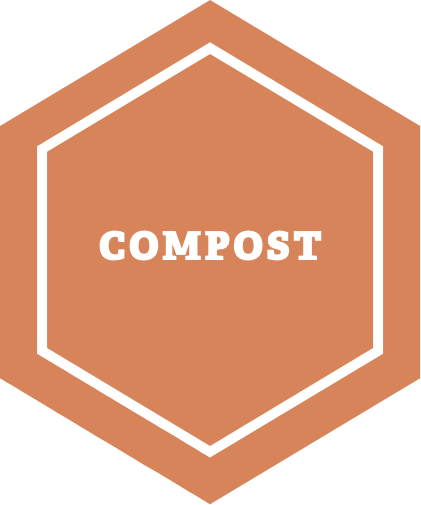